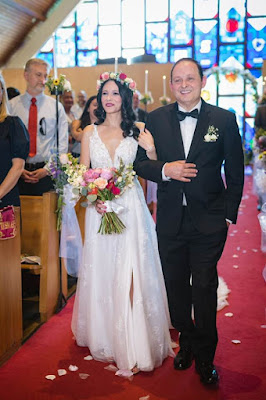 Posted by seraph at 2:36 PM No comments:

Guided by The Spirit... 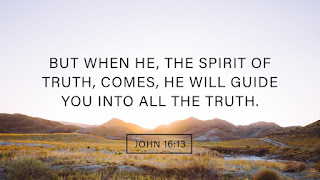 Today’s gospel reading has a remarkable promise that Jesus makes to his disciples… When the Spirit of Truth has come, he will guide you to all truth! This is an   important truth to remember as we navigate through life ! Believers can count on the guidance of the Spirit of God!

Here are a couple of notable examples from Scripture…some   before the Spirit was fully given!

LUKE 1: 39- 45:  Elizabeth was a god fearing woman who for many years was not able to bear children. When it seemed that it would be impossible, she is able to conceive and is full of joy. On her 6th month she receives the unexpected visit of her young cousin Mary who also is with child. 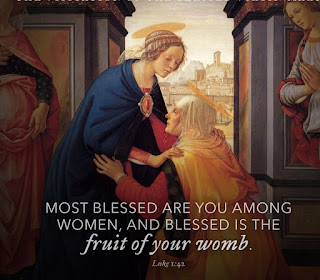 As Mary greets her something happens to Elizabeth, her child suddenly moves and she says is a loud voice:
"Blessed are you among women and blessed is the child you are carrying…who am I that the mother of my Lord shall come to me"
This utterance, this prophetic speaking of truth is the work of the Holy Spirit! Elizabeth was filled with the Spirit and was able to recognize that she was in the presence of her Lord

NO THEOLOGICAL MEANDERING BY EXPERTS but the utterance of a simple woman under the leading of the Holy Spirit what defines this most beloved of Christian teaching about Mary and about her son…Mary is Theotokos, mother of God! The Spirit of truth will lead you to truth! 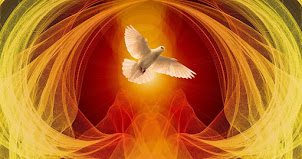 1 CORINTHIANS 2:9: "...Things that no eyes have seen, nor ears heardnor have come into the thoughts of men are those that God have prepared for those who love him….and he  has revealed them by his Spirit..." !

LUKE 2: 25-35:  Simeon was a holy man, a priest who often prayed for the future of his nation, he saw that it was governed by evil men, under the control of a foreign power and in his prayer we are told by Luke the Evangelist that it was revealed to him by the Holy Spirit that he would not die until he had seen the Messiah of Israel.
One day when at the temple he feels drawn to one of the many couples there…one that had come bringing their newborn child. Mary and Joseph. He took him in his arms and blessed him!

Has it ever happened to you that you just happened to be at the right place, at the right moment for something in particular? Have you ever felt  a premonition or an inspiration, the need to call someone, to visit a particular person, that you have been thinking of someone and suddenly they call or you unexpectedly run into them….Is it a coincidence or the very leading of the Holy Spirit? When the Spirit has come, He will guide you! 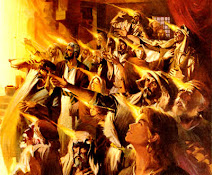 ACTS 10-11, Peter was led by the Spirit to go with three random men to the house of a gentile, a non Jew…something largely forbidden by his religion! Once there as he speaks about Jesus the Holy Spirit comes upon them and Peter, quite astonished hears them prophesy and speak in tongues, a gift previously given only to Jews…!
He was led by the Spirit to be a witness! The action of the Holy Spirit at a gentile’s home in Cesarea, brough a change which humans , religious ones would have been hesitant to make! That day it became clear that all were included in the family of God.

Romans 8:14: “For as many as are led by the Spirit of God, these are the children of God.”

Am I being led?

Posted by seraph at 8:29 PM No comments: 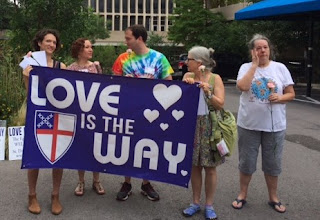 Posted by seraph at 8:00 PM No comments: 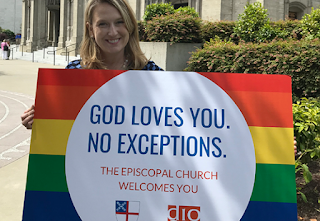 It is pride month and the Episcopal Church is full of rainbows and banners celebrating our LGBTQIA siblings as beloved children of God. Pride, we explain is not the same as the sin of pride that Scripture repeatedly warns us about, but a healthy outlook, a rejoicing in the way God has created all persons to be.

Yet in our celebration of all things LGBTQIA, I do have to ask myself; what is it we want for our beloved siblings?

The God we believe in and serve loves and welcomes all persons into fellowship with him! He accepts us exactly how we are! Yet, we well know that, acceptance is not certificate of completeness or perfection! All humans are imperfect, in need of healing, restoration and change! God’s character and his great love demand it! He receives us and changes us to the very best that we can be! He disciplines and  “corrects” us so that we can be participants in his glory! If you want to be a Christian, prepare, because change is inevitable!
These are the words of the Apostle Paul to the Corinthians some of which were certainly LGBTQIA :

“such were some of you. But, you were washed, you were sanctified, you were justified in the name of the Lord Jesus Christ and the Spirit of our God."

Are we prepared to be truthful to those in the LGBTQIA community that are part of our church family or feel drawn to it by our invitation and support? Are we prepared to say that following Jesus is less about pride and much more about humility? That sometimes it entails taking up our cross to follow him? That often the things we think most valuable about ourselves are precisely those God wants to mold, change or maybe have us give up altogether?

Can we be sincere in saying that when a person comes to Christ a new identity comes into being, where “old things pass away and there is a new creation”?  Can we be candid in explaining that; as we “put on Christ” in baptism, relationship with God, being children of God, becomes the primary identity of a Christian, above race, nationality, status and even gender? 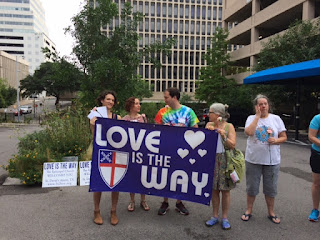 I would hope so! It is what Christians know to be true!
God is faithful, what he has begun in each of us he has promised to bring unto completion,  St. Paul claims that it is until each of us has come to the measure of Christ….that is quite a tall order.

Of course a question which would be in the mind of all, specially those who have been persecuted because of their sexual orientation, is whether God finds it sinful? Whether being a Christian means attempting to deny their deepest feelings? and if it were possible change who they love? 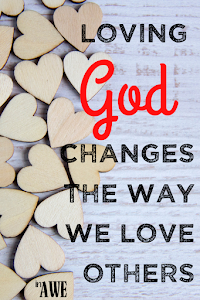 What I do know is that no matter whom you love, God will certainly change HOW you love!

Human love tends to be conditional, selfish and imperfect, often temporary. When it comes to sexuality, we can be led by our desire for intimacy, to people and places sure to hurt us!

I have had the opportunity over many years in my profession and ministry to see the results of this! People who, looking for love, ended up feeling used and abandoned, going from one hook up to the next, with an STD, overusing drugs and alcohol in an attempt to fit in , or stuck in relationships that were hurtful and abusive.

LGBTQIA persons are not exempt from any of that!

As we celebrate the love God has for each person, we have to be sensitive to those who may be struggling with the effects of sin or tied to behaviors or relationship patterns that are destructive! These things hinder us  from becoming the person God has destined us to be!

Christians have to be able to lovingly, without judgement, point out that for all of us , God wants better!

Just like for the heterosexual, there may be different paths to holiness for Christians who are LGBTQIA! For some there may be marriage to a same or opposite gender spouse, mixed orientation marriages although difficult, do occur!  For others celibacy or committed friendships might be the path God chooses!

The Episcopal Church’s To Set Our Hope In Christ, written as response to the Windsor report, reminds us of the qualities that, for Christians, make LGBTQIA and all relationships holy:

“…Exclusive, life-long, unions of fidelity and care for each other have been experienced as holy. These unions have evidenced the fruit of the Holy Spirit: “joy, peace, patience, kindness, generosity, faithfulness, gentleness, and self-control” (Galatians 5:22- 23). More specifically, members of our congregations have seen the fruit of such unions as sanctifying human lives by deepening mutual love and by drawing persons together in fidelity and in service to the world….”

It goes further by comparing these holy relationships to prevailing patterns in our world:

Their holiness stands in stark contrast with many sinful patterns of sexuality in the world. As a report to the Lambeth Conference of 1998 stated very well: Clearly some expressions of sexuality are inherently contrary to the Christian way and are sinful. Such unacceptable expressions of sexuality include promiscuity, prostitution, incest, pornography, pedophilia, predatory sexual behavior, and sadomasochism (all of which may be heterosexual or homosexual), adultery, violence against women and in families, rape … From a Christian perspective these forms of sexual expression remain sinful in any context.

May we celebrate pride along our LGBTQIA siblings, and continue to strive for a world where there is equality for all, where none have to hide or pretend to be different that how God has created them! 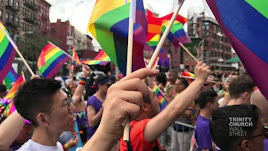 May we point those outside the church or far from God to the arms of Christ, who loves all persons and who has a life better that any of us have imagined.
May we be allies, friends, prayer partners, as people are led to the life of holiness God has set for them!

May we remember that celebration of who we are is but the beginning, that there is a promised becoming that will be revealed, when Christ has come!

What do we want for our LGBTQIA siblings…nothing but God’s best!

Posted by seraph at 6:08 PM No comments:

The Gospel of Nice? 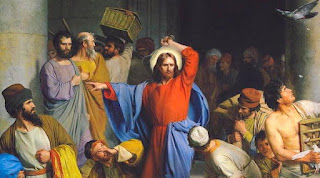 Posted by seraph at 3:46 AM No comments:

Email ThisBlogThis!Share to TwitterShare to FacebookShare to Pinterest
Labels: TEC, The Episcopal Church 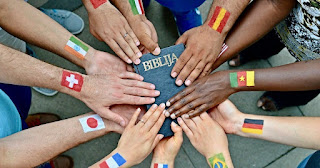 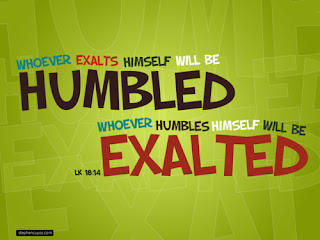 I came across this post from several years ago and it seemed so appropriate for this time, given my recent experiences.  Please click on the link below to access the original post!
SERAPH SAYS: PRIDE AND CONTRADICTION:
After over a decade in the Episcopal Church as a priest in a diverse parish and one who is committed to the life and health of our chu...
Posted by seraph at 11:46 PM No comments: 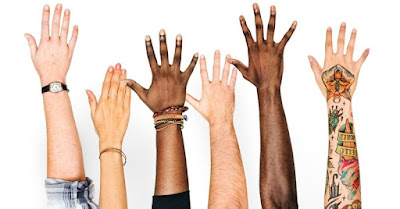 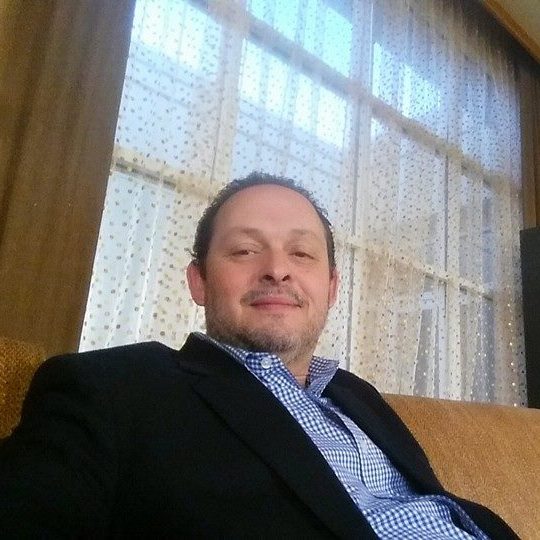 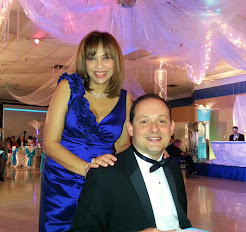 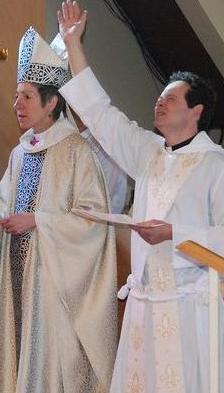 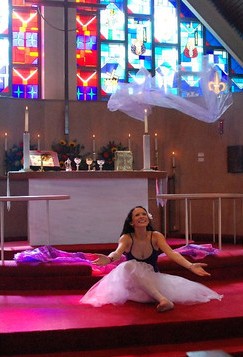 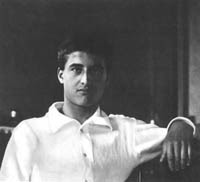 " charity is not enough, we need social reform" 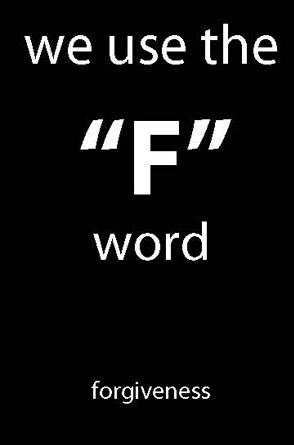 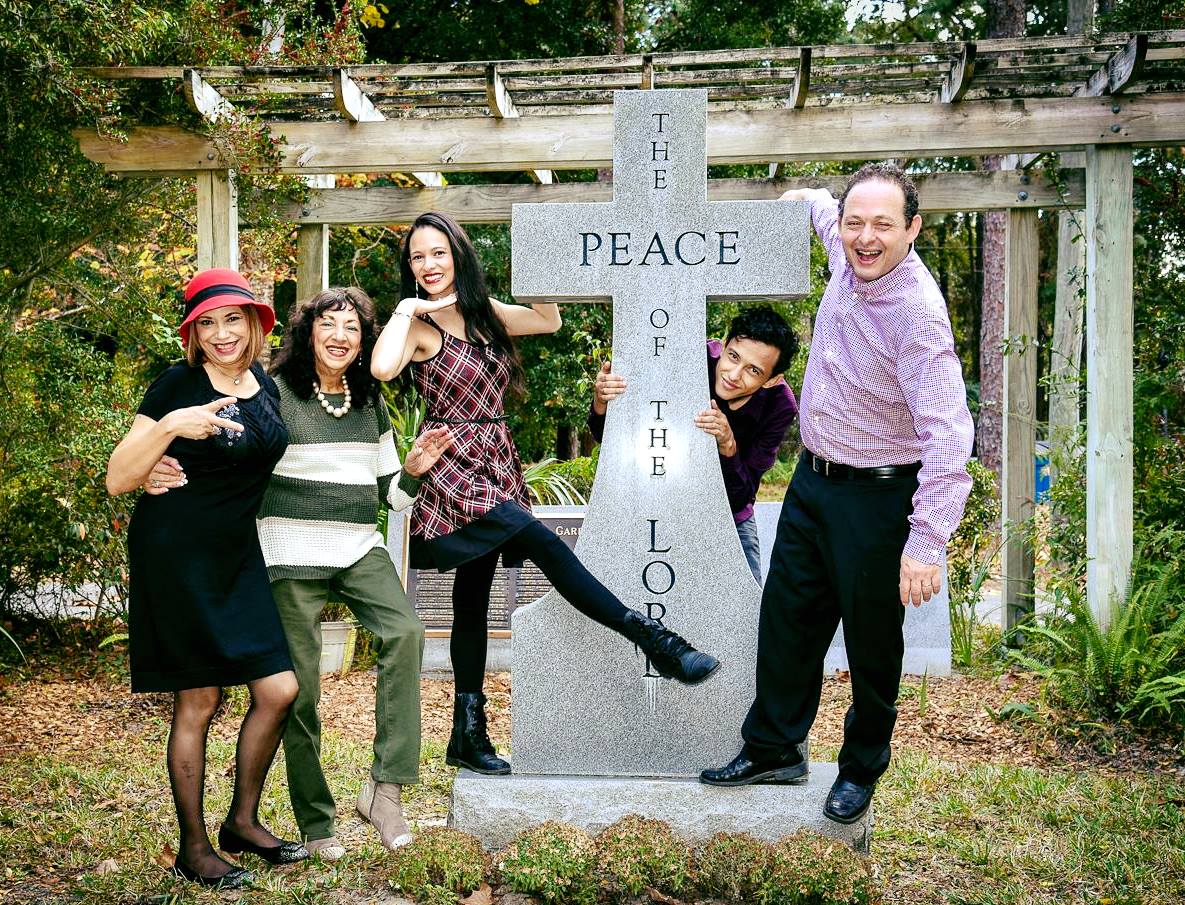 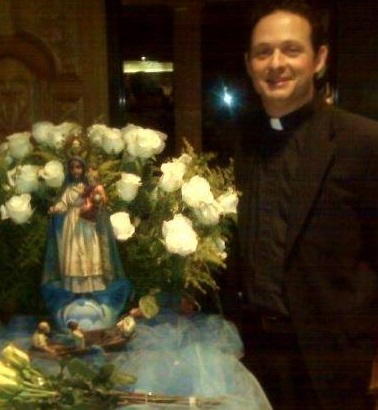 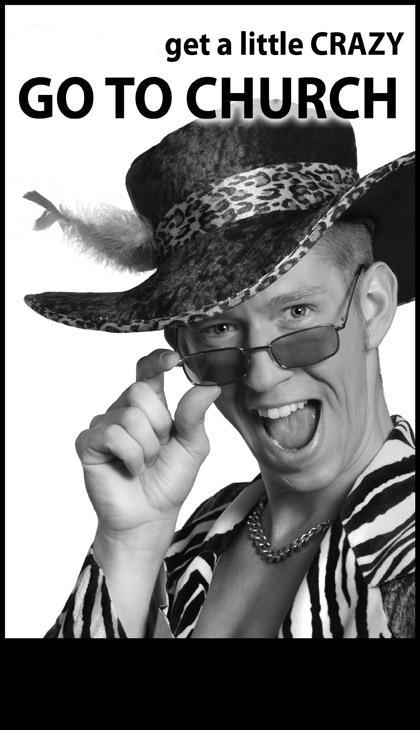 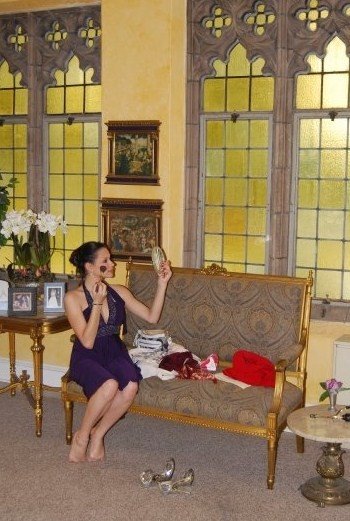 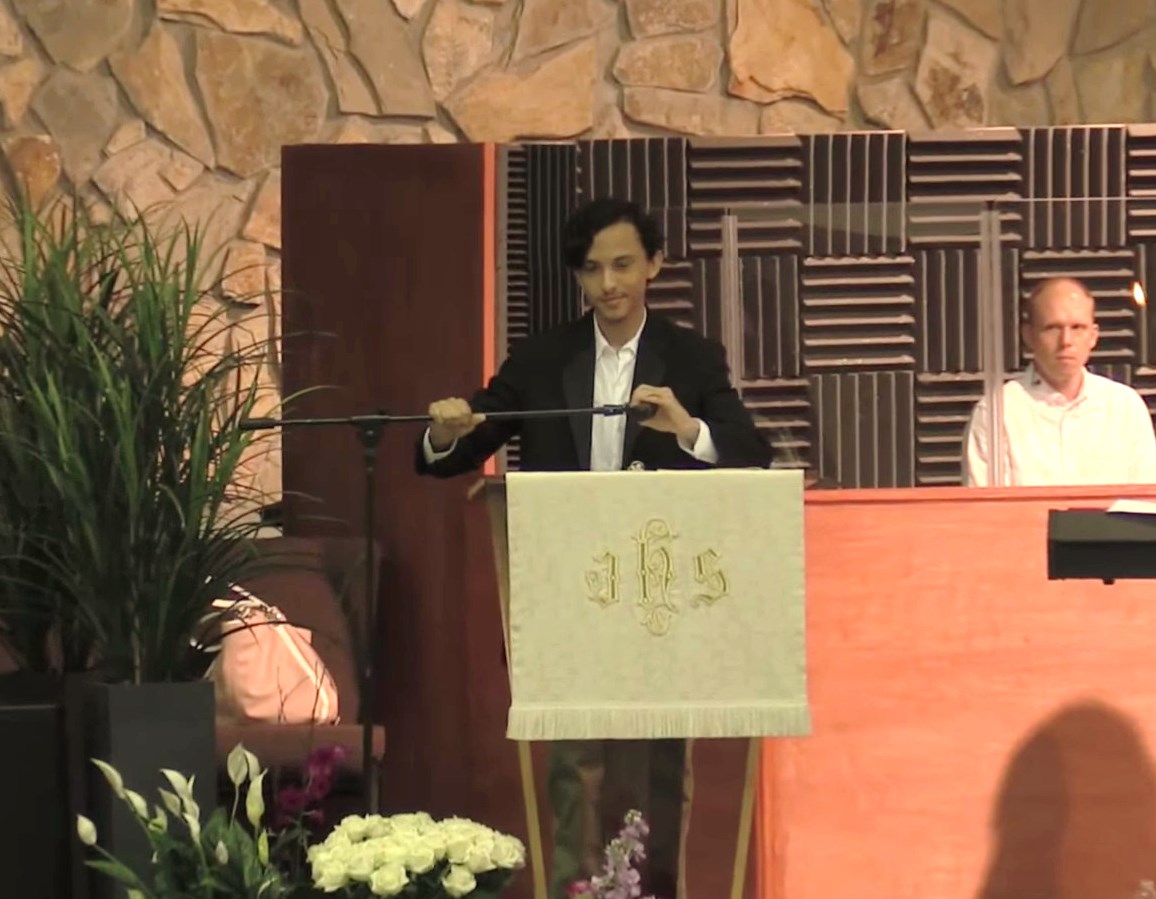 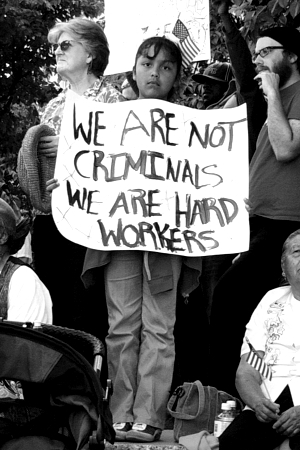 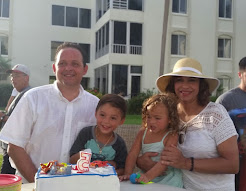